This Saturday, Mutable Matter was invited (thanks Gail & Nicola!) to join a ‘Secrecy and Technology’ bus tour, led by artists from the Office of Experiments and facilitated by Artscatalyst, the John Hansard Gallery Southampton and SCAN as part of the Dark Places exhibition. I had travelled down the night before to stay at a friend’s house and, refreshed from cream-covered slices of Lee’s divine lemon cake, a surprisingly entertaining Jean-Claude Van Damme movie, a novel toothpaste experience and a good night’s sleep, we set off the following morning on our most surreal coach tour so far…

The tour was centred mostly around Cold War technology and targeted places such as Porton Down and Chilbolton Observatory. Unfortunately, we could not access most of these sites, but were able to come quite close with our coach while our tour guides supplied us with any information they managed to get their hands on from official facts to conspiracy theories. At one ‘prohibited place’ some of us even descended into a seemingly randomly placed & publicly accessible nuclear bunker. 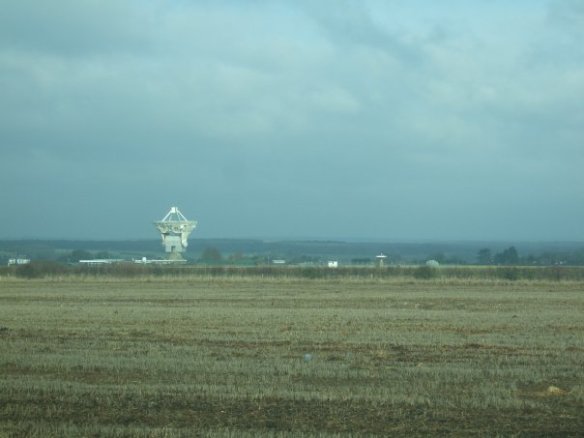 At lunchtime, catering was provided at (thankfully not by?) the International School for Security and Explosives Education (ISSEE) who also supplied us with a short insight into their work. The ISSEE is on the grounds of the famous Chilmark quarries which were used as an ammunitions store for about fifty years from the 1930s, and recently became a commercial mine again. It was interesting to hear that the school does not only train explosives experts, but also medial professionals who have to deal with the physical and mental effects of bomb exposure. 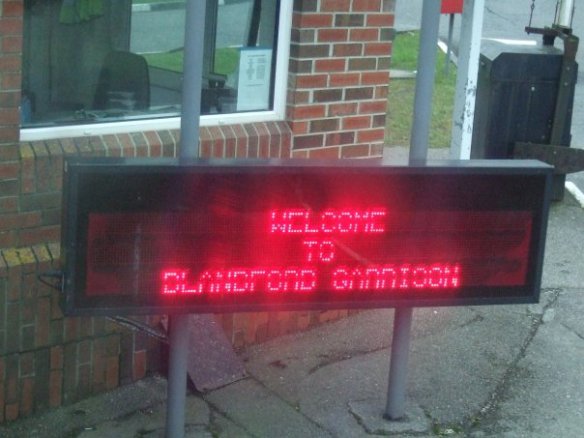 The last stop was the Royal Signals Museum, which did not only provide a short history of military signalling, but also kitted out more than a few artists with survival gear…

For someone like me, who currently engages a lot with ‘invisible risk’, the tour added another dimension to this term. Our contribution to making these technologies invisible was brought more to the foreground than ever through the seamless running-into of fields, thick, moss-saturated vegetation, ‘banal’ everyday life and secret MOD-fenced spaces surrounded by a multitude of founded and unfounded rumours. It resulted in the question of how much of this invisibility is not just a ‘material condition’, but ‘man-made’. In the case of the particular sites we visited, how much was the invisibility fabricated by those wanting to keep what happens at these sites secret, and how much we play a part in fabricating this invisibility ourselves?

On the bus this led to discussions about how one should (or can) act around such sites as an individual or group. Demand access? Trust the government? Draw more attention to them as a form of vigilance? What alternatives are there to having such sites?

Being primarily attended by artists, another question on the tour was: what effect can art engaging with such sites have? The introduction to the Office of Experiments website actually reads: ‘the proper contribution of art to society is art’. Back to square one? Maybe the way to go really is, as the site further suggests, to (self-)experiment and follow the outcomes… any other suggestions?