It is carnival season all over the world (at least for another few hours – happy pancake day!) and there appear to be as many carnival traditions as there are countries, cities or even carnival associations. Although carnival has its origins in ancient culture – examples named include festivals in Mesopotamia of 5000 years ago and the Roman ‘Saturnalia’ – it is most closely associated with Catholicism and the time leading up to lent in our times. In Germany, too, people are celebrating carnival.

Few people outside of Germany know that many Germans spend months (drunk) in the streets (at subzero temperatures), in festival halls or glued to the television looking at grotesque floats and listening to the congregations of ‘idiot’ or jester parliaments (I mean the carnival ones). Every year, around 2 billion euros are spent on costumes, parties and float building materials. Officially, carnival season starts on 11 November at 11:11 hrs – in other countries such as Britain a time of silent remembrance – and finishes on Fat Tuesday. The the biggest and most mediatised days in Germany are ‘Rosenmontag’ (Rose/Shrove Monday), the climax of the season, and Weiberfastnacht (the women’s day of the carnival on ‘Dirty Thursday’/Shrove Thursday). On Weiberfastnacht, women have a special licence for outrageous and ‘unwomanly’ behaviour, which include the performance of symbolic castration acts, such as cutting off men’s ties (my father still mourns the loss of a particularly cherished tie, which he accidentally wore on the wrong day of the year). The media tends to show groups of costumed, giggling and slightly inebriated women wielding large metal, cardboard or foam scissors). It is this spectacle that caught my interest after nearly two decades abroad, which had sufficiently ‘defamiliarised’ this event for me.

So, how come we have a ‘women’s day’ in German carnival? When was it put in place? What were women’s roles in German carnival over the ages? Looking through academic literature, newspaper articles and blog posts on the subject, an interesting picture of ‘top down’ and ‘bottom up’ initiated changes emerges. According to medieval historians, German carnival aka ‘legalised anarchy’ has always been a man’s business. Women’s roles in carnival were traditionally taken by men, especially the ‘virgin’ that forms part of the Cologne carnival ‘trifolium’ of peasant, prince and virgin. Cologne has a special position in German carnival, also for women. A big metropolis in the Middle Ages and a city that has defined itself through carnival for two thousand years, Cologne has always been subject to different rules. Not only did it have the most lavish carnival festivities, but these also included women, who wielded more economic power than in other places. While not trusted with important functions in the carnival parliament, they were allowed to join the ‘less serious’ aspects.

The elevated status of women in Cologne did not lead to the institutionalisation of a ‘Women’s Day’ in carnival, however. According to this article (in English) it was a group of disgruntled washerwomen in the Rhine area who were understandably unhappy that the men were off partying while they had to take care of the dirty laundry. Storming the townhall of Beuel and taking hold of the town’s keys – symbol of the mayor’s power to reign – they revolted and established a women’s carnival committee. (I would be interested to hear more about how that worked in detail…) This local revolt has become regarded as the event which started the ‘Weiberfastnacht’ idea and continues to be celebrated even in other places where women continue to storm town halls in solidarity. Apparently, the custom of cutting off men’s ties did not start until the relocation of the West German capital to Bonn, where secretaries started challenging the ministers’ power during carnival season. 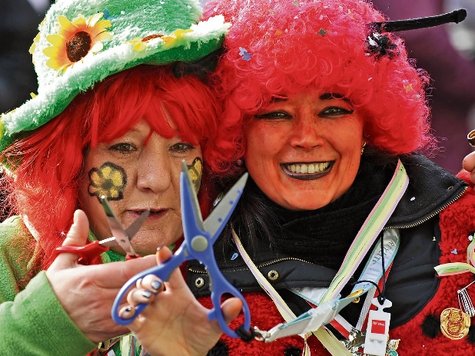 Yet the washerwomen’s intervention was not the only one in German women’s carnival history. Unsurprisingly, major changes occurred during the reign of the National Socialists and their ‘Strength Through Joy’ programme. Of all eras, it was under Nazi leadership that more women were incorporated into the carnival. On the whole, the Nazis tried to move carnival away from its Christian association and towards a Germanic ‘heathen’ and patriotic interpretation. Carnival was to be centralised and cleansed of regional dialects and characteristics. This loss of local identity was to be compensated by generating a sense of unity through antisemitism and hatred towards other countries. Christian symbols, including many traditional costumes, were to be purged, too, from the carnival repertoire. As Die Welt reports, some carnival associations were so thorough in their acts of purification, that people started to look too normal and ‘German’ in their clothing, and parades became criticised for blurring the boundaries between ‘idiot’ and ‘everyday life’. (The sentiment that carnival has become too normative is still felt by many ‘non-normative’ groups and has, amongst other events and critiques, led to the formation of Cologne’s ‘alternative carnival’.)

The enforcement of normativity went further. While being wildly enthusiastic about the potential of carnival as mass seduction – to represent and amplify a Germanic cultural community – the Nazis were also horrified by the criticism, anarchism, effeminacy and lewdness that were inseparately linked with the festivities. Eroticism, in particular, was deemed ‘un-German’ and diagnosed as Jewish corruption. The first thing that had to go were men in dresses. The ‘virgin’ could no longer be portrayed by a man and had to be a ‘real woman’, elected to embody the Nazi ideal. The last male ‘virgin’, who went through the streets of Cologne in 1935, was both cheered (by the traditionalists) and booed (by the NS party members). Here is a poster introducing the first female ‘virgin’, taken from a recent article German newspaper Die Welt entitled ‘The Nazi fear of gay virgins’. (Now that’s some title!). I am quite surprised that the lady wasn’t blond…

‘Paula I’, the article tells us, was received enthusiastically by the crowds – at least according to Nazi propaganda, but probably in reality, too. Although a myth of a 1935 ‘Narrenrevolte’, an anti-Nazi jester plot, exists, authors of a book on Hitler and carnival found the protest to be constructed by carnival officials to mask their Nazi activities (documents of actual goings-on were found destroyed). According to current evidence, the ‘revolting’ high jesters merely desired more power and subsequently obliged in the de-queering and ‘proper feminisation’ of carnival. After all, carnival had just restarted and gained state support after about two decades of dismissal and great poverty, so the carnival revival was something to be preserved. Despite the dangers, protests did occur, and it seems as if women themselves were not comfortable with this top down role-change. Still excluded from the all male carnival societies, they were given an awkward representative function.

The other thing we know is that the female carnival virgin was the first novelty to disappear from Cologne carnival after the war. Men re-asserted this role (despite the vast surplus of women) and still carry it today. The only measure of Nazi ‘straightening’ that remained was the female ‘Tanzmariechen’ – a female soldier who dances in cute, revealing 18th century style uniforms. Traditionally, this ‘dancing Mary’ was also portrayed by a man – performing parodies of military discipline by swinging his legs can-can style or otherwise inappropriately (you can see the dance of a male Tanzmariechen in this documentary from 21mins24). Today, the Tanzmariechen (or Funkenmariechen) has less comical and more artistic merit, simultaneously sanitising and re-eroticising the role’s origins in the figure of the (female) sutler, a military  (adult/child) prostitute, for the disciplined heterosexual man. Still, male Tanzmariechen have not died out entirely, and ‘gender confusion’, initiated by both sexes, remains an all-present feature.

After the war, the idea of the Weiberfastnacht continued to gain more widespread support and was finally instated as a fixture of German carnival. While still a very male domain, today’s carnival is seeing women’s societies, conferences and prominent female carnival poets/singers. The change in status, as during previous ages, appears to have less to do with the inherent permissive, performative and/or visceral nature of carnival, as many social theorists claim, but with women’s economic power. Following carnival caricature mode, one could say: in top down ‘feminisation’, women are expected to perform their ‘traditional’ role for male convenience, whereas in bottom up feminism, women chose to be jolly, scissor swinging maniacs. This mechanism does not only seem to hold true for carnival, but for other areas of women’s struggle as well. A recent essay by Despina Stratigakos on female architects at the turn of the last century stresses a similar point. When women built networks and pooled resources, they were able to compete more closely on equal terms. When women’s equality was introduced by the Weimar Republic government, women failed to challenge the status quo, because many of them felt that they no longer had to keep on fighting for equality. Another example can be found in the activities of the Barefoot College, which first tackles women’s education and economic power to assist bottom up struggle (the documentary Solar Mamas is well worth watching). As a German carnival historian put it (at the end of this documentary), carnival is not really a reversal of society, but a mirror. It is up to us to look at it, laugh at the absurdity of the situation and take action.